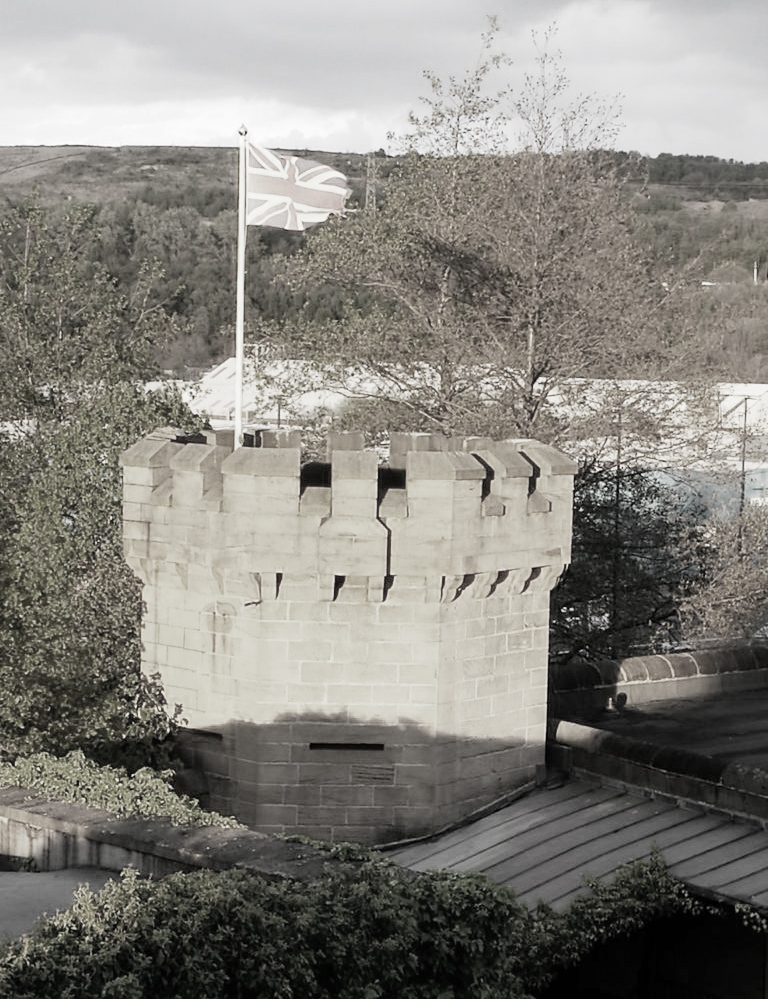 History of the Garrison Hotel

Now a Hotel converted from a former military guardhouse and ammunition base, the Garrison Hotel in Sheffield is brimming with character.

With entrances on both the Langsett and Penistone Roads, the Barracks were considered to be among the finest and best arranged in the Kingdom, and as a military deport ranked among the largest in the country. The first Barracks master appointed in 1854 was Captain Francis Minchin.

The whole site is known as Hillsborough Barracks. As a grade II listed building, it represents the only surviving example of a walled Barracks in the country.

The Barracks was solidly built in a substantial scale, having a turret at every corner of the perimeter wall, stone walls four feet thick in places, and hefty oak timbers. The whole ground is irregularly shaped and is surrounded by a wall, having a tower at each of its six or eight angles. The architecture is a mixture of the Gothic and castellated style.

The Barracks were originally built and completed in 1854, built to house regiments of cavalry and infantry, but by the early 1870’s, batteries of the Royal Artillery were beginning to be stationed here. One of the first was the ‘Battery Royal Horse Artillery.’ However, in 1897 the Barracks ceased to be used as an artillery station, and reverted to quartering a cavalry, the first being ‘Squadron 2nd Dragoon Guards (Queen ‘s Bays). This appeared as a temporary measure as the regiment left in 1899 before the ’32nd Brigade, Royal Field Artillery’ returned in 1901. Members of the ‘Yorkshire Dragoons’ and the ‘Yorkshire Hussars’ who had volunteered for service in South Africa during the Boer War underwent training at the Barracks in 1900.

The ‘4th (Royal Irish) Dragoon Guards’ returned to Britain in 1856, after serving in the Crimea, and established their headquarters at Hillsborough. On 23rd June of that year, the Officers and NCOs of the 98th (Prince of Wales’s) foot, also stationed at the Barracks, gave a dinner for the Guards. Later, on the 28th July, the Guards’ Officers were entertained to a banquet at the Cutlers’ Hall, which was attended by the Earl of Cardigan. Lord Cardigan returned to the Barracks on the 5th September 1857 to inspect the ‘7th (The Princess Royal’s) Dragoon Guards’ prior to their departure for duty in India.

An interesting anecdote was made suggesting that because the accommodation quarters had verandas, the buildings were of a design more in keeping with the Indian climate, verandas being common place in Indian barracks for airing bedding. It has been mooted that plans were mixed up and that somewhere in India is a barracks which ought to have been built in Hillsborough. Whether or not there is any truth in these stories is uncertain but the Barracks were built in Hillsborough Sheffield.

Work on The Hillsborough Barracks was completed in 1854, having begun in 1848. Costing £124,000, and covering an area of 22 ½ acres, it was the largest War Depot in the Country. Built mainly of solid stone blocks, with walls reaching four feet thick in places, it was essentially a fortified town.

Many amenities were found within the walls; a fully equipped hospital, general store, joiners, smithies, gymnasium, cobblers, tailors, saddler, baths, a ballcourt, a rifle range, a riding school, along with many other buildings.
As an example to the immensity of the place, there were 20 underground water tanks. The bigger ones held 50,000 gallons each, and the smaller ones, just 12,000 gallons.

During its time, many battalions were stationed here including the Kings Dragoon Guards, 7th/10th/15th Hussars, the York and Lancaster Regiments, Green Howards, and Dublin Fusiliers. The final battalion housed here was the 29th Regiment of the 19th Field Brigade of the Royal Artillery.

The Barracks were finally put up for sale in 1932, by order of the War Office, and tendered to local auctioneers, now estate agents; Eadon, Lockwood and Riddle. The asking price of £10,000 was deemed too steep when it was offered to auction where it was retracted. Burdalls then bought the site for an undisclosed sum and converted it into a factory making gravy salt.

In the early 1990’s, the site having remained largely unused and abandoned for  some years was redeveloped in to what you see today. However, many of the buildings visually remain unchanged from the outside and you can still imagine
troops parading on the site of the car park and a large cannon being cleaned and prepared for war where the Petrol Station now lies.

The main focus of the complex is the Morrisons Supermarket covering the old Artillery Parade Ground, which has been roofed for the purpose, and is fronted by the clock-towered stable block.

The old Infantry Parade Ground is now a two-storey car park between the Stable Block and the old Officers’ Mess (now the headquarters for Sheffield Insulations Ltd).

The old football ground and rifle range has since been redeveloped in to a DIY Superstore. The Married Quarters which served as flats until the end of the 1970s were demolished and the area is now a fast food outlet.

Which brings us to The Garrison Hotel. Built in 2001, in what used to be the Guardhouse, possibly housing soldiers awaiting Court Martial. If you look closely, you can still see the old jail cells in the Guardhouse Bar, and upstairs in the Garrison Function Room.

Review us on Tripadvisor.

Book a Room
Book a Meal
What's on?
Host Your Event